In the year 1998, when Gregory Chabollah was three year plus, he was diagnosed with a form of autism called the Pervasive Development Disorder – Not otherwise specified or PDD-NOS.

His mom, Michelle says Gregory growing up as a child was really difficult for him and the family. At that same period when Gregory was at his tender age, the diagnosis was one in every ten thousand children, so this implies how difficult it was for Gregory and his mom battling with both school and the society at large.

Gregory Chabollah had a heavy diagnosis and several specialist predicted or had said that he will not speak rather will he feed himself, dress himself and do less writing and reading. And he was advised to be taken home and to be showed much love from his family. 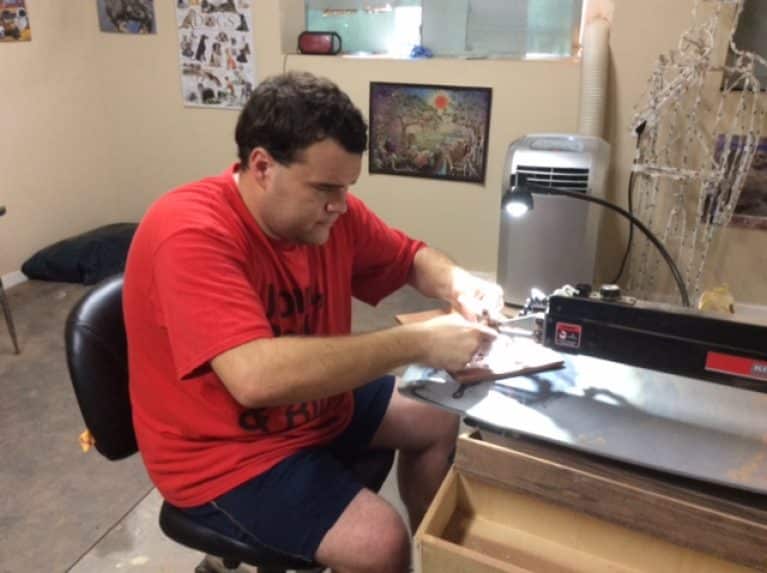 Gregory Chabollah had huge support from his family and with the love he got from his family, he did not allow that autism diagnosis define his life. He was able to do more than what the specialists had predicted for him and that was because of his interest he had in woodworking business.

Gregory Chabollah was introduced to the woodworking business when he met a certain man called Pasty Williams and at the time he met him, he was making crosses on a saw and Gregory felt that it would be great for him to do.

After meeting Pasty, he agreed to teach Gregory woodworking and this was because of the interest he saw in him. At first, they both commenced at making simple things before they moved further in making complicated cuts and designs. And at the nearest future, Gregory was able to turn that initial interest to his full time job and later started selling his works to people.

After some few years, his woodworking business developed across Texas and online too, especially with both his official website and facebook account which was easily accessible to get contact with him, it allowed people to see his works and admire the lovely works he had done.

Gregory Chabollah is currently active in linking up art shows and festivals and through facebook, he consistently allows people to link up with him and sight his work. The biggest joy he is really having in his life is that not only can he create wonderful and creative works as a woodworker; he could also interact and communicate with his purchasers and his family.

Anyone who has heard Gregory Chabollah story will surely use it as an inspiration to progress or succeed in life despite the challenges he or she faces in life. What made Gregory a success in woodworking business as the passion he had for it, the focus and the interest he also had in it.

If you are inspired to know woodworking or you know anyone who wants to try out woodworking, then he or she must be interested in learning about it and full focus and interest in it.

The benefits woodworking gives to people is that it enables them live their life to the fullest despite the different challenges in life.

Read the full interview with Gregory on Sawinery: